A Book That Marked A Turning Point

Samuel Smiles - or "Self-Help-ful Smiles," as Rudyard Kipling happily called him - said: "A book written two thousand years ago may fix the purpose of a life." 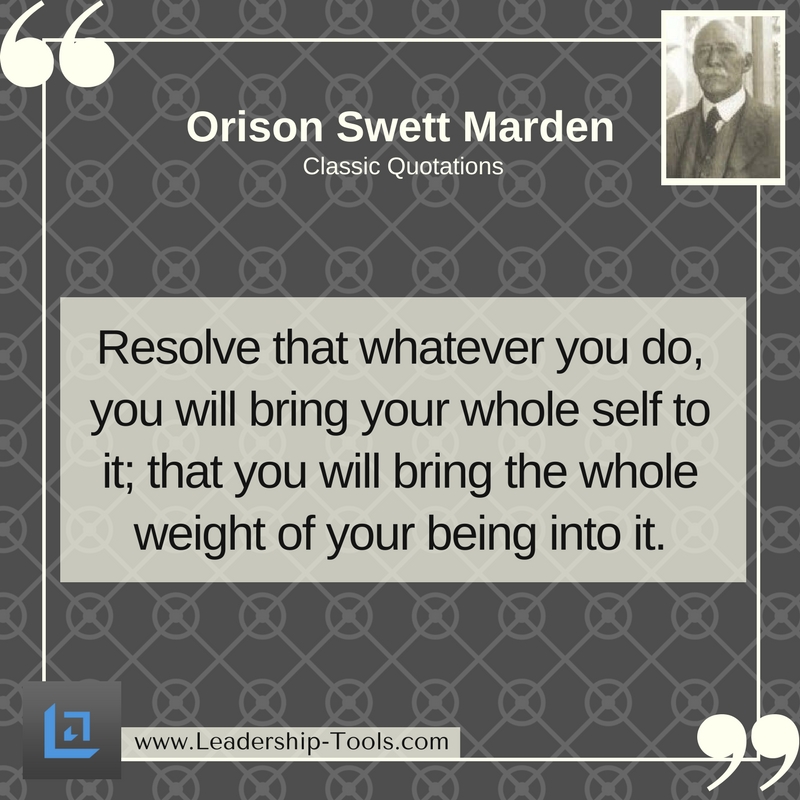 Probably the first book of its kind ever published, it would be interesting to know how many young lives were fixed in their purpose by the reading of his book, entitled "Self Help."

Certain it is that it first stirred the literary impulse and fixed the purpose of the boy, Orison Marden, who later became the "American Smiles," the inspirer of millions of other readers.

Samuel Smiles was the first literary hero, the first great inspirer of young Marden. The reading of "Self Help" was the great event of his youthful life, the event which crystallized that thing in the distance, "wrapt in the silence unseen and dumb," which was awaiting his call.

He came upon the book by chance, having found it stowed away in somebody's attic. It was in a very dilapidated condition, but no priceless book gave a greater thrill of joy to the heart of its possessor than the discovery of this tattered volume gave to the heart of the backwoods boy:

"That fateful red-letter day when I happened to get hold of Smiles's 'Self Help' marked the turning point in my life," he said, years later. "I felt like a poor man who had just by accident discovered a gold mine. The book was a perpetual delight to me, and I treasured it as if it were worth its weight in diamonds, reading and re-reading the precious pages until I had almost committed them to memory.

"Boys and girls of today, living in the midst of great opportunities, surrounded by schools, libraries, all sorts of books and reading, and a multiplicity of educational facilities, can hardly understand what Smiles's wonderful pages meant to a backward, green country boy."

"I knew nothing whatsoever of the great world outside the hills of my native state. Up to that time I had not seen, perhaps, more than fifty different people at any one time. I had not seen a newspaper of any description, and not more than half a dozen books. As far as I can recall, the only book we had in the house was the Bible."

"Neither my father nor my mother had obtained more than a very ordinary common school education; nor had I then met more than one or two persons who had more. I had no idea of the great cities of the world or of what was going on there. In fact, I thought the rest of the world was very much the same as that little, narrow, mountainous, rock-bound wilderness in which I had been born and reared."

"Thousands of successful people owe their first start in the world to his great book, 'Self Help."

"One not brought up in a similar environment can hardly imagine what a revelation the book was to me. It opened the door of my narrow life and revealed to me a new world of which I had hitherto had no conception. It changed the whole current of my thoughts and my whole outlook upon life. The stories of poor boys climbing to the top so thrilled and inspired me that I then and there resolved to get out of the woods, — to get an education at any cost, — and to make something of myself!"

"Living in a very sparsely settled country, twenty-four miles from the nearest railroad station, up to this time I had not dreamed that I could get a college education, or that there would be any chance for me to do more than make a living at hard work as others all about me were doing. But after reading 'Self Help' something — a voice within, — kept saying to me: 'There is a chance for you, — you can be somebody, — you can do something and amount to something.'" 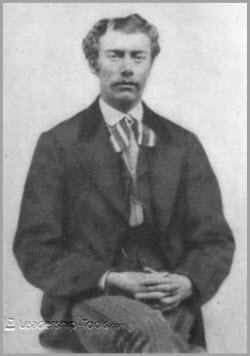 "No young man starting in life could have better capital than plenty of friends. They will strengthen his credit, support him in every great effort, and make him what, unaided, he could never be. Friends of the right sort will help him more - to be happy and successful - than much money..."

"The picture of Samuel Smiles in an old shed, talking to poor boys, gathered from the streets of London, about success in life, thrilled my imagination! I could close my eyes and see him showing them their possibilities and pointing out that, though they were poor and apparently had no opportunity, they yet might become great men, even as other boys as poor as they who had done great things for the world and risen to distinction." 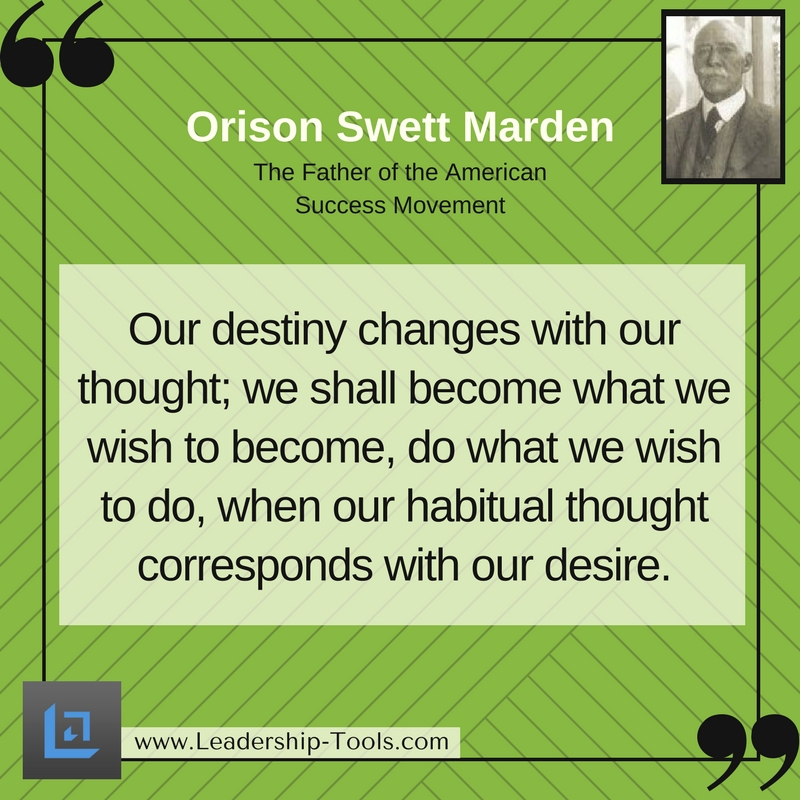 "To me the little book was as the friction which awakens the spark sleeping in the flint, and I said to myself: 'If those men whom Mr. Smiles describes, could do such wonderful things, as boys had no better chance than mine, why can't I do something? I, too, must have a power to help myself that will do as much for me — if I can get hold of it — as the energy that they found in themselves did for them."

"It not only awakened me to a knowledge of my own possibilities, but also created in me a burning desire to develop them. It filled me with the hope that some day, perhaps, I might be able to do something that would stimulate and encourage poor American boys like myself to develop and make the most of all the powers God had given them. In fact, I even then conceived the bold idea that I might in the future write something that would help others!"

"Later I began to get together material for a book which, I dreamed, might some time be to American boys what Smiles's 'Self Help' had been to English boys, — what it had been to me. The reading of the book filled me with such a deep sense of gratitude to the author and to the Author of my being that I longed to show my gratitude and appreciation."

In after years, when the great world of books and of men had been opened to him, he had other heroes, but none ever came closer to his heart than the author of "Self Help." He loved Emerson, and Oliver Wendell Holmes, the latter having been one of his instructors at Harvard, and Longfellow, Phillips Brooks, and others, but he always looked up to Samuel Smiles as his liberator, as the one who first threw open the doors of his mental prison. He never lost an opportunity of acknowledging the debt that he felt he owed him. 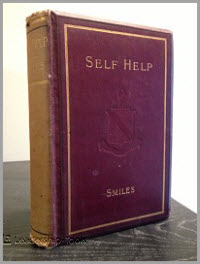 After the establishment of Success Magazine he paid this tribute to his memory:

"It used to be common for men to have several vocations, and if they were men of sufficient caliber they would succeed fairly well in all; but the world has become so specialized in these strenuous electric days that it is rare for anyone to achieve marked distinction in more than one line. The late Samuel Smiles, however, the famous author of 'Self Help,' did a dozen different things during the last seventy years, and all were well done."

"For several years he was editor of the Leeds Times. He was a historian, traveler, writer of the life stories of well-known men, philanthropist, skillful surgeon, moralist, poet, amateur painter, secretary of a great railroad company, and, many years ago, noted agitator with John Bright for the repeal of the corn laws. His books won him honors, and royal decorations at home and abroad."

"Such inspirational books as his 'Self Help,' which has been translated into seventeen languages, have, without a doubt, aroused the ambition of more young men and young women to do something worth while - than almost any other books."

"But for 'Self Help,' probably the Success Magazine would never have seen the light of day, for the book was the first thing to suggest to its founder the idea of his life work."

"The stories of poor boys climbing to the top so thrilled and inspired me that I then and there resolved to get out of the woods, — to get an education at any cost, — and to make something of myself!"

"The long life of Samuel Smiles's books on humble themes, with no attempt at rhetorical flights, shows that the need exists for inspirational writers. The world needs more than anything else men like Smiles, who will arouse others to express the best that is in them, stimulate them to do the biggest, strongest thing possible to them, instead of being content with smaller, weaker accomplishments."

"He was the great apostle of practical ambition and self-betterment. Not to appeal to the imagination or to arouse the passions of his readers, but rather to arouse them to do the best of which they were capable — to struggle to be something and to do something worthwhile in the world — this, was his steadfast purpose. Thousands of successful people owe their first start in the world to his great book, 'Self Help.'"

The immediate result of the reading of the volume in the case of Orison Marden, was the stirring up of his whole nature to actively revolt against the conditions which held him in ignorance and bondage.