The Rise And Fall Of 'Success'

When the writer became associated with Doctor Marden, — or, "the Doctor." as the members of the Success staff from the beginning familiarly called him, the magazine was yet an infant in swaddling clothes.

The editorial "office" was still in Boston, in that same room from which the editor had not only bartered his books but had also pawned his overcoat in order to buy a dictionary! 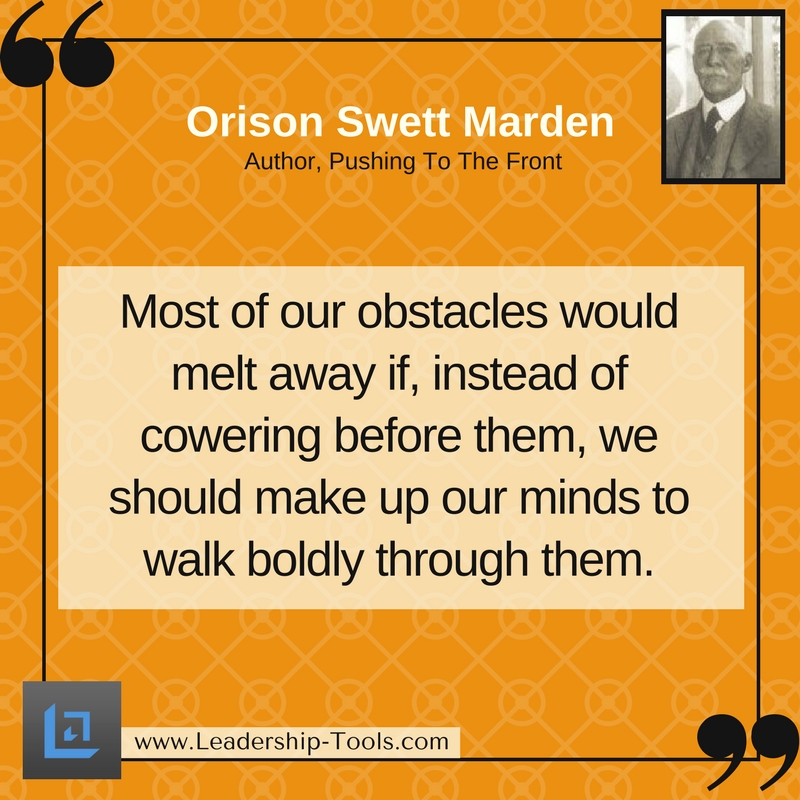 In a desperate effort to make both ends meet, the new-fledged editor was repeating the hand-to-mouth struggles of earlier days. Despite this he was happy. He felt, at last, that he had found his real vocation, that he was in a better position to benefit men!

He was dreaming great dreams, but he worked while he dreamed.

Like Lincoln, whom he so loved and admired, while his head might be in the clouds he always kept his feet on the earth. While his feet were on the floor of the "second-floor back" in Bowdoin Street, his eyes saw something beyond, something that no one else saw at that time. He had a vision of a great magazine that would carry his gospel of self-help and success far and wide.

One afternoon he gave me a glimpse of this vision. Standing by the window near my desk, talking half to me and half to himself, he said, quietly:

"Success will some day have a home of its own in New York. It will have a hundred employees and at least a hundred thousand subscribers."

"Do you really think so, Doctor," I said, "that Success will ever grow to that size?"

"I don't think, I know it!" was his quick response. "If I didn't see such a future for this magazine I never would have started it!"

This was typical of the vim and enthusiasm he put into everything he undertook. It left no room for doubts or fears; and, as the blacksmith at his forge hammers and bends the red-hot iron to his purpose, he bent circumstances to his will.

The way the public reacted to Success, launched as it was in the midst of difficulties and discouragements, was one of the most remarkable things in the history of magazine publishing, and showed that the editor's faith in such a magazine was not misplaced. It hit the mark at once.

Zona Gale, in an article in The Critic, covering "Editors of the Younger Generation," said: "To name a magazine Success was to account for it. There is magic in the name, just as there was found to be when Samuel Smiles changed his unknown book with an abstruse title into 'Self-Help,' and immediately found it in every bookshop. People like to think that they have a lucky charm. Success has been a charm to a good many people. The magazine did have a future, and it 'came true' almost at once."

Its name indeed proved a "lucky charm." Within a few years from its humble beginnings it had outgrown its narrow quarters in Cooper Union, and was occupying an entire floor of the University Building, in Washington Square, New York. In a few years more, it had that home of its own which its founder had visualized at the start, and his own position was established as a vital force in the efforts of modern progress.

When Success moved up from Washington Square to the Success Building, in East Twenty-second street, between Broadway and Fourth Avenue, it ranked as one of the most popular and stimulating magazines in the world.

Success Magazine occupied a unique field as the only publication of its kind. It had its own printing plant, a force of two hundred or more employees, and a growing circulation steadily mounting toward the half-million mark.

The Success Building became a central power-house of inspiration. The editor-in-chief of Success was the dynamo that generated the power. He filled his employees and everyone else who came in contact with him with his own enthusiasm and an urgent sense of the wonderful privileges and opportunities of life.

Editorials and articles that stirred the most sluggish flowed from his ever-active mind, while the magazine itself was a channel of life through which men and women prominent in every field spoke to their fellow men.

The magazine had become what Dr. David Gregg, in an early letter to its editor, prophesied it would become. "Success will be a living organ of a living age," said Dr. Gregg. "It will connect those who are striving for success with those who have succeeded, and thus enable them to get power from living batteries.”

Frances E. Willard made an equally optimistic prediction. Writing about the same time, she said, "I rejoice that you are to take the wonderful word 'success' and put into it God and brotherhood. You have hit the nail on the head. Keep pounding away. It is enough to stir the blood of age, these bugle notes from those who have set flying the echoes of 'Excelsior.'"

"Men often become what they believe themselves to be. If I believe I cannot do something, it makes me incapable of doing it. But when I believe I can, then I acquire the ability to do it even if I didn't have it in the beginning."

Men and women of national and international repute rallied to the support of Success, and their contributions helped to maintain the high standard set by its founder. 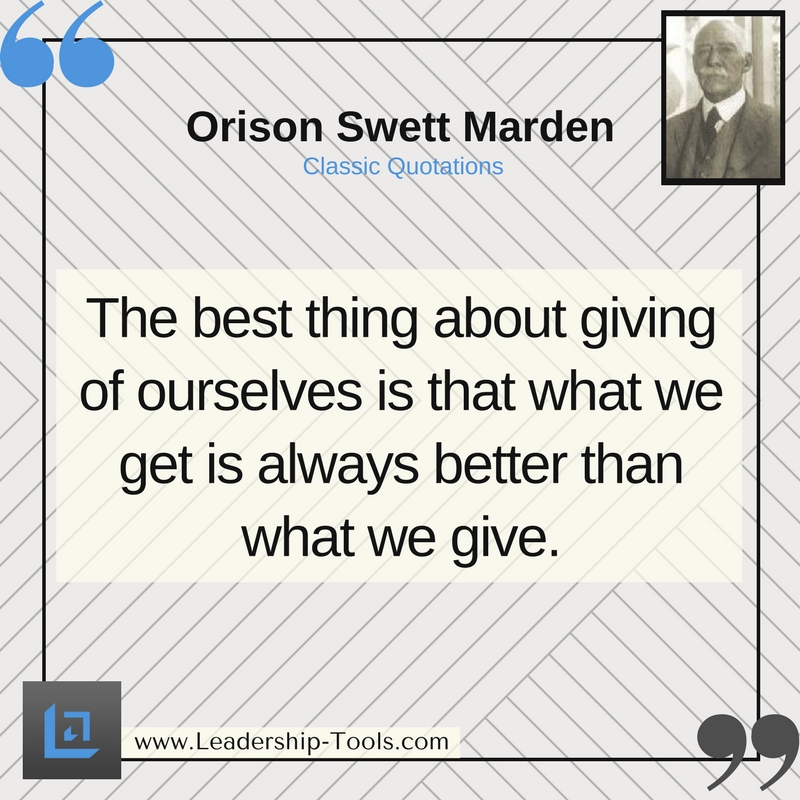 Like the book which suggested it, the appeal of the magazine reached around the world, it had subscribers in every English-speaking country, and in many foreign lands. It inspired the publication of a magazine along similar lines in Japan, while the Indian Academy of Science, in India, conferred on Doctor Marden an honorary degree for "the distinguished service he had rendered humanity at large through his writings."

The ideals and ambitions of the poor boy from the backwoods of New Hampshire had become realities.

He had reached the apex of editorial success. But again came one of those strange reversals of fortune with which he had battled all his life.

Rival magazines were now seeking some weapon with which to challenge his position. Many ingenious plans were evolved without avail, until "muck-raking" attacks upon big business men and politicians were launched. These magazines, in attempts to command public attention, directed assaults upon American political and civic life, upon the personalities and methods of our great industrial leaders, and upon some of our institutions. And for a time they succeeded.

"Muck-raking" swept the country like a pestilent wave. To speak well of a man or an institution became a "lost art." A period of destruction and confiscation of character and property set in.

So great became this wave that it forced its insidious way even into the magazine founded on faith in God and man. Inside groups in Doctor Marden's own Success "household," through ingenious methods, playing on his faith in man and his associates, maneuvered until they secured control of the magazine. They vetoed his principles; reversed his policies; joined the "muck-raking" writers; and entered upon a regime of exploitation and what they believed to be "expansion" — until one day the climax came.

The splendid structure, the institution that Editor Marden and his ideals had built, collapsed. Like modern Samsons, the muck-rakers had pulled down the temple on their own shoulders.

Like all large publishing plants, Success had monthly bills running into the thousands of dollars with printers, paper-makers, and others. The expense of getting out a single issue of such a periodical is enormous, and its income from subscribers and advertisers is spread over a period of months. Consequently, the life blood of a great magazine is credit.

In swerving from Doctor Marden's fixed standards, and attacking "big business," Success laid itself open to a counter-attack below the waistline, in its most vulnerable spot — its financial credit — and this is just what occurred.

It was dealt a staggering blow when a great banker — evidently offended by these articles on big business — stated politely, but firmly, that its loans must be curtailed. Demand notes were called in. Printers and paper men grew insistent, and Success suddenly found itself upon the financial rocks. It was forced into the hands of a receiver — and this despite its hundreds of thousands of reader friends.

"The greatest weapon against stress is our ability to choose one thought over another."

Marden witnessed the cruel shipwreck with a sense of twofold loss. In the crusade against big business, he had seen some of his best friends in the business world thrown into the muck-raking arena.

Great as were his financial losses, they were as nothing compared with the sting of a personal trust betrayed. His beloved magazine had been the connecting link between himself and its great throng of readers, the medium through which he had come into intimate personal touch with them. It had become a part of himself, something which he felt he could not let die, and himself survive. It was the crowning blow of his many defeats — something he later never cared to dwell upon, in talking even to his most trusted associates.

Nevertheless, the Marden fighting spirit was not daunted. And it was in this spirit that he again rose after the first shock of defeat. To him it was but a temporary defeat, out of which a greater victory could and should be won.

So, just as twenty years before, in middle life, he had started to re-write "Pushing to the Front" while the first manuscript lay in ashes in the ruins of his hotel, now, although facing old age, he began, while the debris of his undermined magazine lay all about him, to make plans for the New Success that was to rise out of the Old.