The Parting Of The Ways

When the excitement which followed the events related in the preceding chapter had subsided, Marden had an opportunity to review his affairs calmly.

For some time he seemed to have been on a sleigh, rushing downward with such headlong speed that nothing could stop him until he should reach bottom. Looking over the wide field of his hotel operations, he saw nothing but ruin on every side, for the Kearney catastrophe was only one of many. 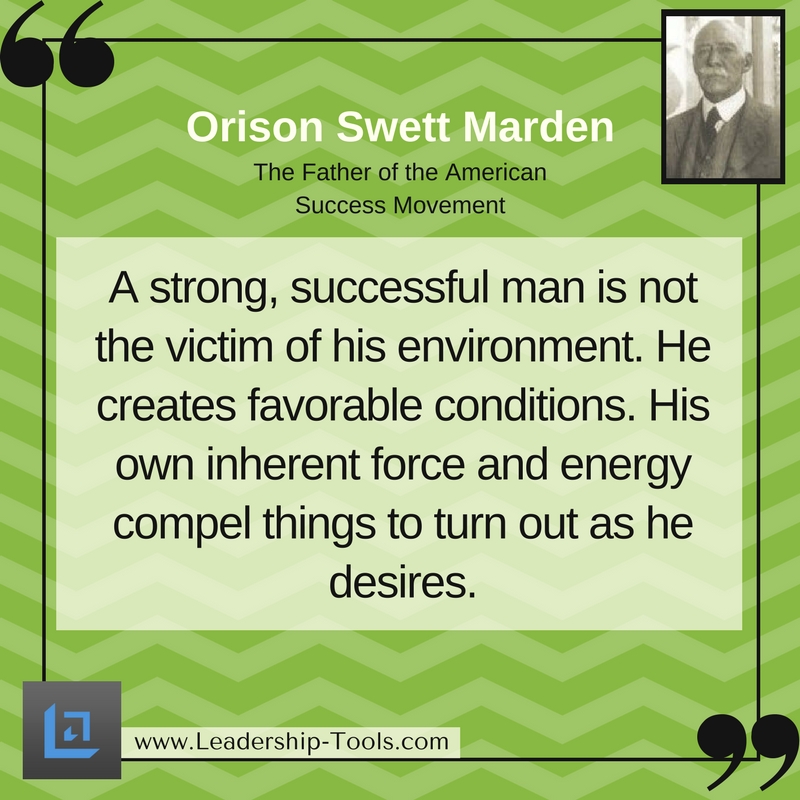 After his return from Europe, and prior to his going to Nebraska, he had visited Florida, and, while exploring that State had been much impressed with the beauties of Fort George Island, in Duval County, just off the western coast, in the Gulf of Mexico. He believed that it could be made into an ideal health resort.

He succeeded in interesting capitalists in his idea, and they joined him in purchasing nearly the whole island. A company was formed and a first-class hotel was erected.

Everything looked favorable for the enterprise, but hardly had the hotel been completed when, in some mysterious way, a fire started upon the roof. The watchman, having detected it in time, and having succeeded, as he believed, in putting it out, hurried to his sick wife in the lower part of the building.

She had been alarmed by the threatening blaze, and her husband wanted to reassure her, by letting her know that the danger had passed. But it had not. He had not quite stamped out the fire, but had left it smoldering. No sooner had he gone than it flamed up again. There was no fire department on the island, and the new hotel was quickly reduced to ashes.

As Doctor Marden was the heaviest investor, this was a serious blow to his fortunes. Coming about the time that the crop failures started in Nebraska, it greatly increased his financial embarrassments. He tried later to extricate himself by selling the Palmer House, at Grand Island. But though the entire amount of the purchase money on that property, over twenty thousand dollars, was nearly paid up, all he succeeded in getting for it was three hundred and eleven dollars!

Moreover, so utterly had the crop failures demoralized business in Nebraska that all of his investments in and around Kearney had turned out even worse!

Like the dreaded cyclones of the West which travel with lightning speed across the face of a smiling country leaving trails of ruin and devastation in their wake, the financial cyclone, which started in Kearney, did not stop until it had wiped out the entire Marden fortune and left him deeply in debt.

The phantom of disaster, seemed to travel across the continent to Block Island, there destroying by fire some four or five hundred Marden bathing houses. Through the negligence of his Block Island agent, nearly all of his insurance had expired, but he rebuilt the houses before the next season opened.

In July, however, when the Manisses Hotel was well started in business, smallpox broke out in one of its cottages. The dreaded disease spread until there were five cases. The hotel was quarantined, the summer colony rushed away from the Island, and business for the season was ruined.

The fury of the financial cyclone had still not yet come to full force. In an effort to relieve the situation in Nebraska, Marden had borrowed some money from a private banker, of Providence, giving a mortgage on the Manisses as security.

The banker, at this critical juncture, suddenly died. His heirs were all strangers to the owner of the Manisses, and they sold the hotel at auction. He thus lost the entire thirty thousand dollars he had invested — the first fruits of saving from his college days.

n the midst of those difficulties, the heirs of the man who had lost his life in the Midway Hotel fire brought suit for five thousand dollars against the hotel. Feeling in Kearney, however, was so strong in favor of the lessee — Marden — that the attorney for the prosecution saw there was no possibility of getting a local jury who would bring in a verdict against Marden. Therefore, he went to the attorney for the defense and voluntarily offered to release his client from the suit.

Meanwhile, through the good will of the Kearney citizens, a new Midway Hotel had risen on the ruins of the old. But, owing to the changed conditions following the collapse of the boom, there seemed to be little demand for a first-class hotel and it languished for lack of patronage.

While operating the hotel and hoping against hope that business would improve, Marden spent his spare time in rewriting the manuscript of his book. Yet he did not relinquish his desperate efforts to retrieve his fortunes.

"Material success was not Marden's goal. "To benefit men" had always been his ideal."

In the summer of 1892 the Hot Springs Company, of South Dakota, sent for him to open their new hotel. He bought the necessary furniture in Grand Rapids and Chicago, fitted up the hotel, and managed it until the business was well established. Then the company became involved financially and he was obliged to sue for his salary. The jury brought in a verdict in his favor, awarding him twenty-seven hundred dollars.

The following year he put in a bid for the management of the Park Gate Hotel, one of the largest of the World's Fair hotels in Chicago. Twelve other hotel men also competed, but, although several of these, including one from the then famous Leland Hotel, considerably underbid him, the owners of the Park Gate, after thorough investigation of the claims of the different contestants, decided to employ Doctor Marden.

Their decision was fully justified by the results. The Park Gate, with a frontage of an entire block, had a fine location, between the Sixty-second and Sixty-fourth Street entrances to the World's Fair grounds; and, owing to its excellent management, it became one of the most popular resorts of visitors to the Fair. From three to four thousand people daily patronized its dining rooms.

"It is psychological law that whatever we desire to accomplish we must impress upon the subjective or subconscious mind."

After the close of the World's Fair, Marden returned to Kearney — not to stay, but to wind up his affairs there and decide upon his future. The New Midway Hotel was proving a liability instead of an asset. He was operating it under a long lease, and was losing money. Already he had paid nearly twenty-five thousand dollars in rent, while the loss resulting from decreased business was very heavy.

Finding it impossible, under such conditions, to live up to the terms of his contract, he asked the owner of the hotel to release him from it. In return, he offered to give him the entire furnishings of the hotel, which were almost new. This was agreed to, and Marden was free to quit Kearney and start in a new field.

What should he do? Throw himself into the calling which had been so long beckoning? Devote his life whole-heartedly to the work of authorship which he yearned to do? 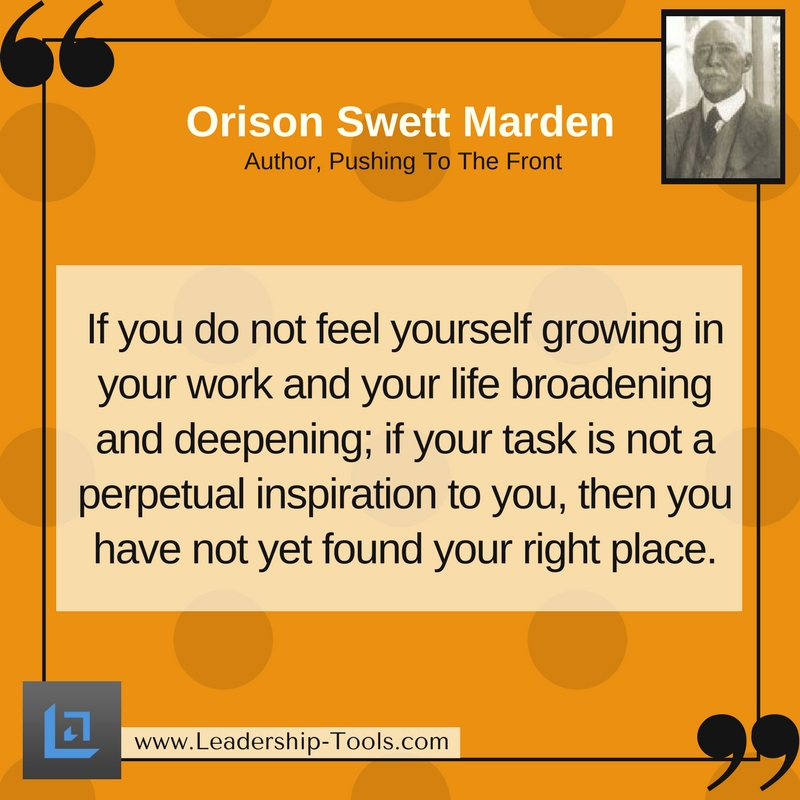 But could he make a living while writing? Would his books be published when written? Would it not be better to stay a little longer in the hotel business — at least until he could save something to live on while trying his luck in a new field?

These and scores of other questions now presented themselves. It was one of the supremely critical moments of his life. He had succeeded in business, and then, through no fault of his own, had failed.

He had made a fortune, and had lost it, — had tasted both the sweetness of success and the bitterness of failure, — had apparently canceled all he had accomplished by a result of his latest failures, — had gone up like a rocket only to come down like its stick, even while the meteor-like glare was fading into darkness and night; and there he stood, at the age of forty-four, not merely penniless, but heavily in debt, considering what he could, might, should, or would do to prevent defeat and disaster and fashion the destiny his heart and soul desired.

The question of questions was, whether the remaining years of his life — his knowledge, his experience, his garnered wisdom, — all the ripe fruit of his own bitter struggles from childhood to youth, from youth to middle age, — should be used in the service of men's bodies, or in the service of their souls? He could make another fortune in catering to their stomachs. There seemed no doubt about that. It was more than doubtful if he could make a bare living in catering to their minds.

The decision to be made was momentous. Material success was not his goal. "To benefit men" had always been his ideal; and, when the time came to choose between that ideal and the accumulation of a fortune, there was no struggle in his heart. It was only a question of ways and means. There was no hesitation or uncertainty as to his ultimate objective.

The crisis in his fortunes crystallized that objective and forced him to a decision. He felt that, if he was to realize his early hopes and dreams — his visions of becoming the Samuel Smiles of America — there was no time to lose.

If he should pass middle life without making a supreme effort to that end, his vision would fade, his ambition die, his hopes turn to ashes. He would get into a rut from which it would be impossible to extricate himself. To be true to the best thing that was in him, he must cut off all side-lines and sacrifice all conflicting interests in the pursuit of his purpose. There was no middle course. He had come to the parting of the ways.

Looking back over the years of struggle and stress through which he had passed, he felt that he had been divinely led, step by step, and that each important decision he had made had been in obedience to the prompting of an inner voice which spoke to him from out of the silence.

"Marden knew if he was to realize his early hopes and dreams — his visions of becoming the Samuel Smiles of America — there was no time to lose."

"Lowly listening" at this crisis, he heard the word and went through the experience which later prompted him to write: "There is a divinity within us which speaks only when every other voice is hushed, — only giving its message in the silence. There are many times — times of storm and stress and doubt — when about all we can do is to hearken to that inner voice, which bids us to hold on to the hand of the Divine Guide until we have run through the tempest zone."

"We have to disregard the criticisms and the discouragements of others, as well as the assaults of fear and doubt, and press on to our goal. We have to close our ears to the voices outside, and listen to the voice within.

In all our difficulties, especially in great crises, we have to take Faith as our guide."

So, the great decision was made. He turned over the last page of his life as a hotel man, wrote "Finished" on it, and closed the book.

Taking Faith as his guide, the middle-aged man — even as the small boy of thirty odd years before — started for the Open Road. He did not know that he was setting out on the most beautiful, the most fruitful and satisfying adventure of his life.

He simply followed the Gleam.