How We Limit Our Supply

What would you think of a prince, the heir to a kingdom of limitless wealth and power, who should live in the condition of a pauper, who should go about the world bemoaning his hard fate and telling people how poor he was, saying that he didn't believe his father was going to leave him anything, and that he might as well make up his mind to a life of poverty and limitations?

You would say, of course, that he must be insane, and that his hard conditions, his poverty and limitations, were not actual, but imaginary; that they existed only in his mind; that his father was ready to load him with good things, with all that his heart desired, if he would only open his mind to the truth and live in the condition befitting a prince, the son and heir of a great king. 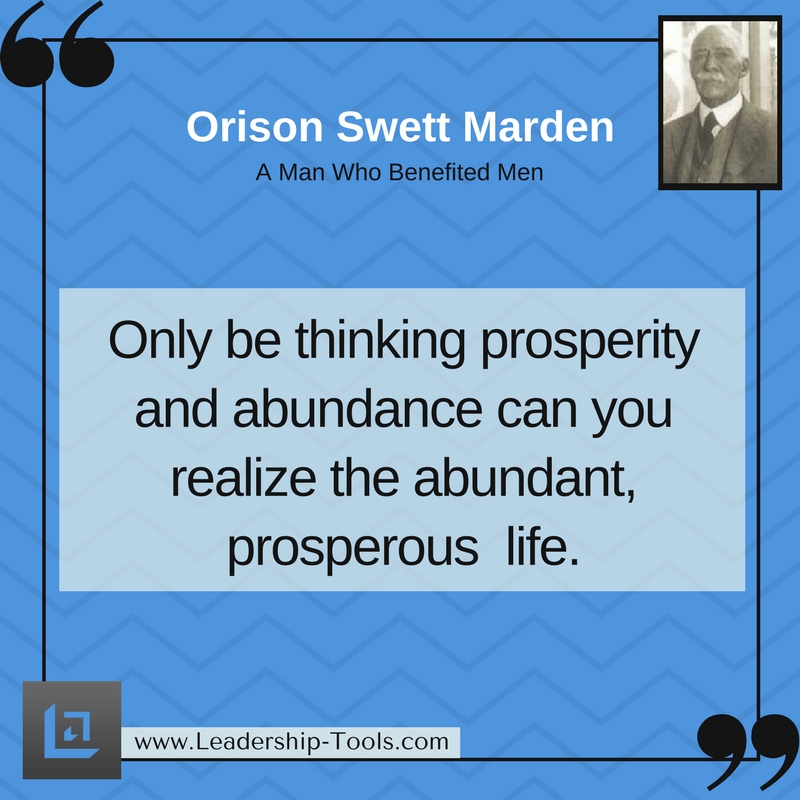 Now, if you are living in pinching poverty, in a narrow, cramped, limited environment in which there seems to be no hope, no outlook for better things; if you are not getting what you want, though working hard for it, you are just as foolish as the prince who, believing that he was poor, lived like a pauper in the midst of his father's limitless wealth.

Your limitations are in your mind, just as the prince's were in his. You are the child of a Father who has created abundance, limitless wealth, for all of His children, but your pinched, limited, poverty-stricken thought shuts you out from all this abundance and keeps you in poverty.

A Russian laborer named Mihok, living in Omaha, Nebraska, had carried a "luck" stone in his pocket for twenty years, never guessing that it had any monetary value. Time and again friends, who thought that it might be more than an ordinary stone, suggested that he have it examined by a jeweler. He obstinately refused until, finally, they became so insistent that he sent the stone to a Chicago jeweler, who pronounced it a pigeon-blood ruby, the largest of its kind in the world. It weighed 24 karats and was worth $100,000!

There are millions like this poor day laborer, living in poverty, thinking that there is nothing for them but hard work and more poverty who, without knowing it, are carrying in the great within of themselves possibilities of wealth beyond their dreams.

Their wrong thinking is robbing them of their divine inheritance; shutting off the abundant supply provided for them by the Omnipotent Source of all supply.

"The difference between what two people get out of life, what they accomplish, and what they represent to others, depends upon the difference in what they expect of themselves."

The majority of people are in the position of a man who went out to water his garden, but inadvertently stepped on the hose, shutting off the water supply. He had a big hose and was very much annoyed, very much disappointed, because he was getting only a mere dribble of water when he had every right to expect — and should get: — a liberal flow. Water was at the source in abundance, ready to supply his needs; only one thing was at fault, the man himself was pinching his supply, limiting it to a miserable drizzle. He was standing on the hose and didn't know it.

That is literally what all who are living in grinding poverty are doing. They are pinching their supply by stepping upon the hose through which plenty would come to them. They are stopping the flow of abundance that is their birthright, by their doubts, their fears, their unbelief; by visualizing poverty, thinking poverty, acting as if they never expected to have anything, to accomplish anything, or to be anything.

Everything in man's life, everything in God's universe, is based upon principle — follows a divine law; and the law of prosperity and abundance is just as definite as the law of gravitation, just as unerring as the principles of mathematics. 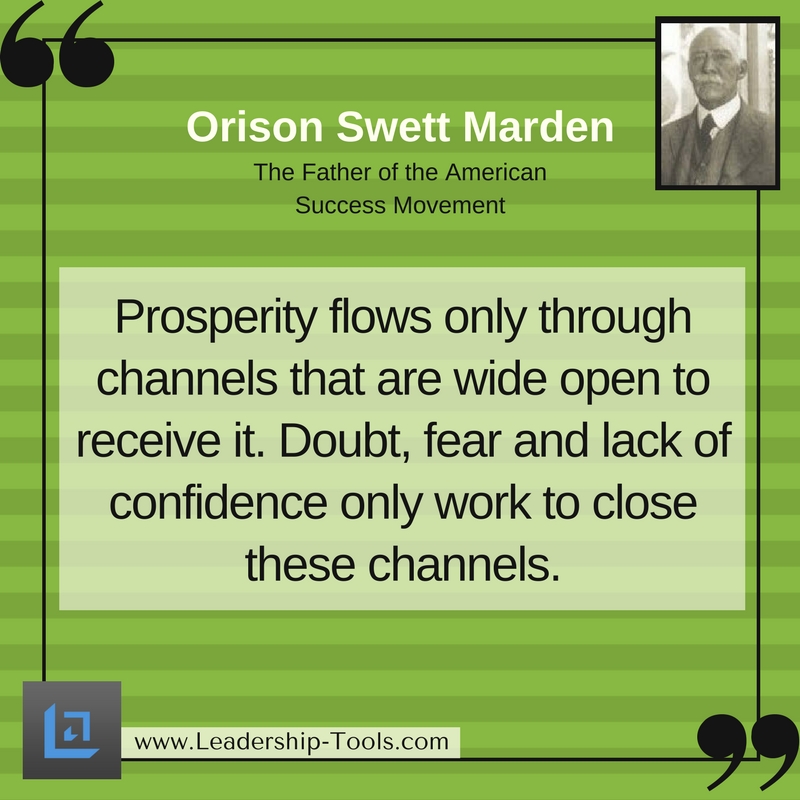 We are the creatures of our convictions. We cannot get beyond what we believe we are; what we believe we have. Hence, if we think that we are never going to be strong or well like other people, or to be successful in our calling, we never will be.

If we are convinced that we will always be poor, we will be. You can't get away from poverty when you don't expect to; when you don't believe that you are going to.

Many of the people who are living in poverty today never really expect anything else. Their fixed belief that they can never become prosperous keeps them in poverty; that is, it keeps their minds negative, and the mind cannot create, cannot produce, in this condition.

It is only the positive mind that can create prosperity; the negative mind is noncreative, nonproductive; it can only tear down, inhibit, prevent the inflow of the good things that we long for.

It is not so much what you do with your hands as what you do with your mind that counts. Everything that has been accomplished by the hand or brain of man had its birth in the mind. The universe itself is the creation of Divine Mind. A hard-working man who longs for prosperity, but is headed in the other direction mentally, who doesn't believe he is going to be prosperous, is neutralizing his hard work by his negative, destructive thought; he is standing on the hose that connects with his supply.

When you limit yourself in your thought, you are limiting yourself outwardly in a way which corresponds with your mental attitude, because you are obeying a law which is unchangeable. You will notice that the man who puts a nickel in the contribution box, is not only stingy and mean in all his money matters, but his face, his whole person, has a cramped, worried, pinched look. He is forever saving pennies, watching out for little things and never doing big things.

No matter how much natural ability he has, his narrow, limited, poverty thought dwarfs him and cuts off his stream of supply. He cannot do big things because he never thinks big things. His warped mind will admit only a pinched supply instead of the big flow that is literally at his command.

It is because we have not learned how to use our thought forces that most of us go about like paupers, never glimpsing the marvelous inheritance left us by the All-supply, the All-good. Our parsimonious thought pinches our supply.

We often wonder why it is that certain people, in apparently no better circumstances than we are, get so much better things than we do; why they always insist upon and receive the best of everything. We never see them wearing cheap things — never see cheap things in their homes, or any pinching anywhere. They buy the best food, the best fruits and vegetables in the market, and everything else in accordance.

We think they are extravagant when we compare what they pay for things with what we pay for things of the same kind, and we pride ourselves that we are economizing and saving what they are wasting. But, are we? How does our manner of living compare with theirs?

Does the enjoyment we get out of life measure up to what they get? Do the few dollars we save compensate for the great lack in our lives — the lack of good food, of proper clothing, of the little pleasure trips, the social enjoyments, the picnics and various diversions which make life pleasant, healthful, and above all, much more productive for the neighbors whose extravagance we condemn? As a matter of fact, our skimped, pinching policy leaves us poorer in the end.

"Everything we get in life comes through the gateway of our thought. If that is pinched, stingy, mean, what flows to us will correspond."

Prosperity flows only through channels that are wide open to receive it.

It does not flow through channels pinched by the poverty thought, by discouragement, doubt, or fear, or by a strangling narrow-visioned policy. A generous expenditure is often the wisest economy, the only thing that brings a generous success.

If a great manufacturer like Henry Ford, a great merchant like John Wanamaker, a big railroad manager, or other business man, should lose his broad vision and wide outlook; should begin to skimp on necessary output; should substitute inferior goods and men and service for the best; should reverse his policy, changing from a broad, generous one to a narrow, stingy one, he would soon find his business dwindling away to nothing.

There is no changing the principle of the law of supply. Whatever your business, your profession or occupation, or your circumstances, your mental attitude will determine your success or failure.

A pinched mind means a pinched supply. It means that you try to tap the great fountainhead of supply with a gimlet and then expect to get an abundant supply. That is impossible. Your mental attitude gauges the How of your supply.