The great trouble with those of us who are living in a world of unfulfilled desires and ambitions is that we do not hold the right consciousness. Dr. Perry Green rightly says that Job's lament — "The thing which I feared is come upon me" — should be changed to "The thing 'which I was greatly conscious of is come upon me."

In other words, it is the thing we hold in our consciousness that comes out of the invisible world of realities and takes visible form in our lives according to its nature, — poverty or prosperity; health or disease; happiness or misery. 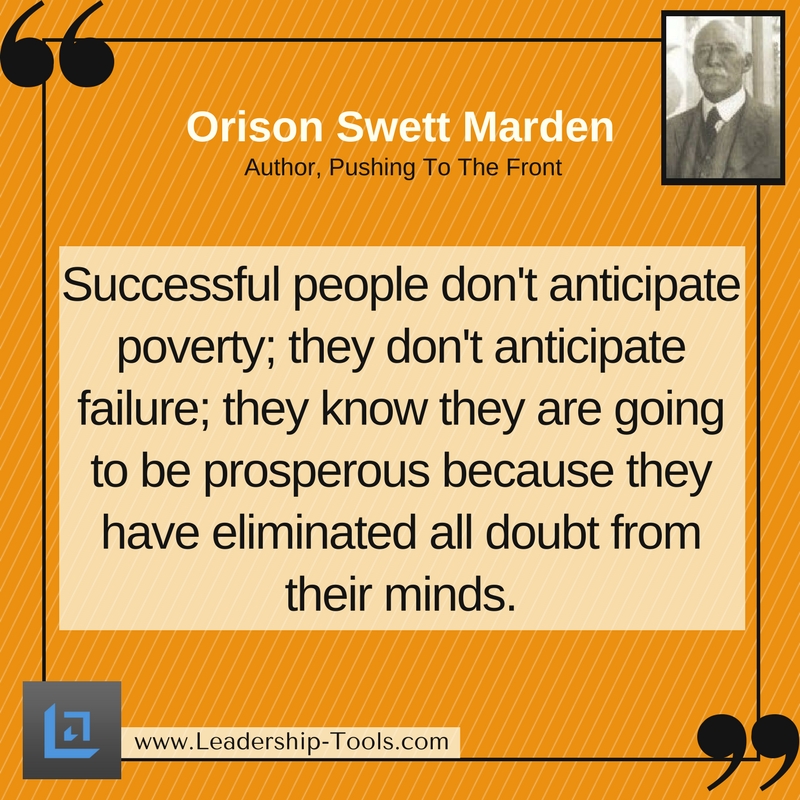 The whole secret of individual growth and development is locked up in our consciousness, for this is the door of life itself. Every experience; whether of joy or sorrow, of health or disease, of success or failure, must come through our consciousness. There is no other way by which it can enter and become a part of the life.

Joan of Arc saved her country, because from childhood she held the consciousness that she had been born to do that very thing. This poor unlettered peasant girl knew nothing about the great law of mental attraction, but unconsciously she worked with it. But for her consciousness of victory she never could have accomplished her stupendous work.

It is the victorious consciousness that achieves victory in every age and in every field. After many years' study of the lives and methods of successful men in every department of life, I have found that those who win out in a large way are great believers in themselves, in their power to succeed in the things they undertake. Great artists, scientists, inventors, explorers, generals, business men, and others, who have done the biggest things in their specialty, have always held the victorious consciousness. Success was the goal they constantly visualized, and they never wavered in their conviction that they would reach it.

Men fail, not because of lack of ability, but because they do not hold the victorious consciousness, the success consciousness. They do not live in the expectancy of winning, in the belief that they will succeed in reaching the goal of their ambitions. They live rather in the expectation of possible failure, in fear of poverty, and coming to want, and they get what they hold in mind, what they habitually dwell upon.

The pinched, narrow, limited, poverty-stricken, fear-filled consciousness; the consciousness that expects stingy returns, that expects poverty and does not believe it will get anything better, is responsible for more poverty than any other one thing.

If you are steeped in poverty and failure, you have no one to blame but yourself, for you are working against the law. You are holding the poverty consciousness, living in the thought of failure. Perhaps you are wondering why you can't create something that will match your ambition, your longings when all the time you are filling your mind so full of discouragement, so full of black, gloomy, despairing pictures, that your whole life is saturated with the failure consciousness. You feel, perhaps, that something, some invisible force, some cruel fate or destiny is holding you back?

"The consciousness of power creates power. What we are conscious of, we already possess."

Something is holding you back, but it is not fate or destiny; it is your discouraged mental attitude, the unfortunate consciousness that you have been holding for years. While you were trying to build on the material plane, you were neutralizing all your efforts by constantly tearing down on the mental plane. You have been obeying the negative law which destroys and kills, blights and blasts, instead of the positive law that produces; that creates, builds, beautifies, develops man's godlike qualities and glorifies his life.

"In proportion to the intensity, the persistence, the vividness, the definiteness of your consciousness of the thing you want, do you begin to create it, to attract it."

What sort of consciousness do you want to develop? What do you want to get, to do, to become? Make yourself very positive on this point for the first step toward the development of a new consciousness is to get a thorough grip upon your purpose, your desire, your aim; to get a picture of it firmly fixed in your mind; to make it dominant in your thoughts, in your acts, in your life! 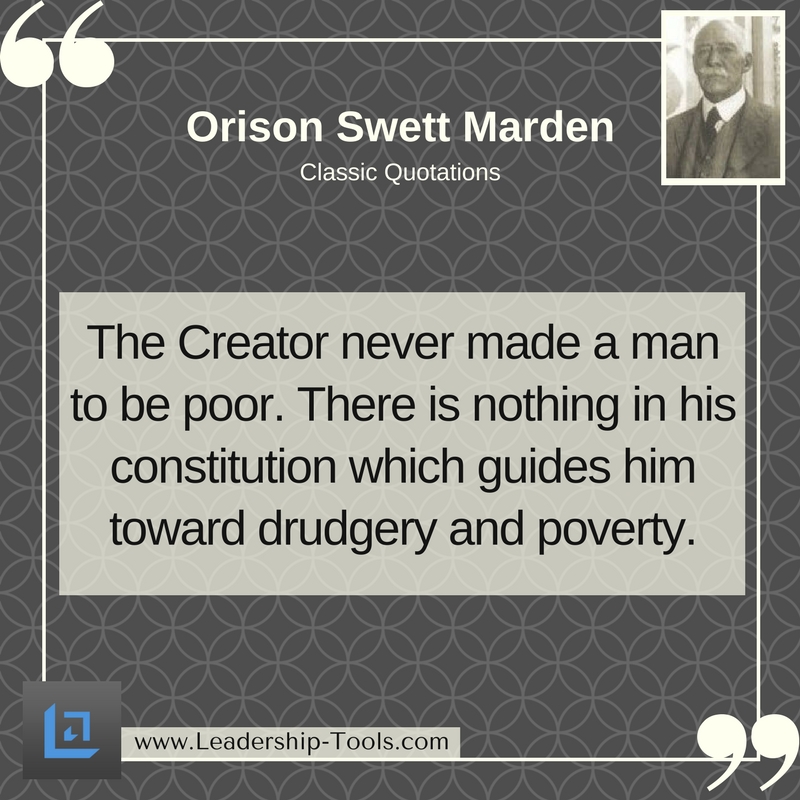 The next thing is to establish the conviction that you can achieve whatever you desire. This is a tremendous step in the way of accomplishment, for conviction is stronger than will power. That is, you may will ever so hard to do a thing, but if you are convinced that you can't do it, the conviction of your inability will prevail over your will power.

Your conviction is your strongest lever of accomplishment. This is what has enabled so many poor boys and girls to climb to high place and power in spite of all sorts of obstacles, and often contrary to the opinion and advice of those who knew them best. They were so thoroughly conscious of their ability to do the thing they wanted to do, and so convinced that they could do it, that nothing could hold them back from their own.

The beginning of every achievement must be in your consciousness. That is the starting point of your creative plan. In proportion to the intensity, the persistence, the vividness, the definiteness of your consciousness of the thing you want, do you begin to create in any line.

We have unlimited power, boundless resources, in the great within of us, but until we awaken to a consciousness of this hidden power, those invisible resources, we cannot use them.

Some time ago a friend of mine saw a small, delicate woman leap over a six-bar gate when frightened by the sudden approach of a cow which she mistook for a bull. He said that this woman told him she could no more have done this under ordinary conditions than she could have lifted a corner of her house from its foundations. But she thought her life was in peril, and, in her great extremity, she became for a moment conscious of the power within. Seeing the cow running toward her, and imagining that it was an angry bull, she had no time to allow her doubts and fears as to whether she could leap over the gate to control her. It was the only means of escape in sight, and with the aroused consciousness of the latent power within her, she cleared the gate without difficulty. But when the imagined danger was past she lost the consciousness of her hidden strength and relapsed into her ordinary condition of weakness.

There are numerous instances on record where invalids and cripples, people who had been paralyzed for years, who did not feel that they could do anything whatever, have risen up from their beds when a fire or some terrible accident endangered their own lives or the lives of those dear to them, and then and there performed marvelous feats, in carrying heavy furniture out of a burning house, rescuing children, and doing other things that would have seemed miraculous even for strong men.

Again and again unusual emergencies give us a fleeting consciousness of our vast reserve powers and we perform prodigies that amaze ourselves, but we don't continue to make the demand on them and the consciousness that it is possible for us to do anything out of the ordinary slips from us and our measureless resources remain untouched.

Emerson says: "Every soul is not only the inlet but may become the outlet of all that is in God." The consciousness of this great truth is the secret of all power. It is the full realization of our connection with Omnipotence, with Omniscience, with the Source of all there is that enables us to use the vast powers that are within us, always at our command, waiting to accomplish our ends.

"The Creator puts no limit to our supply. There is no limitation of anything we need except in our own consciousness."

The Creator puts no limit to our supply. There is no limitation of anything we need except in our own consciousness. That is the door, which, according to its quality, shuts us off from, or admits us to, the great storehouse of infinite supply. The pinched, stingy consciousness never gets in touch with this supply.

It is the man who has faith in his own power to meet whatever demands life may make upon him, who spends his last dollar fearlessly, because he knows the law of supply and is in touch with a flow of abundance, that gets on and up in the world. But the one who hoards his last dollar in fear and trembling, afraid to let go of it, even though he must go hungry, who always carries in his mind a vivid picture of the wolf at the door, never conquers poverty, because he never gets the prosperity consciousness.

A wonderful uplift and courage comes to the man who follows the aspiring tendency in his nature that bids him trust and look up, no matter how dark the outlook. Faith in the Power that orders all things well tells him that there is a silver lining to the black cloud which temporarily shuts out the light, and he goes serenely on, feeling confident that his plans will succeed, that his demands will be met. His is the consciousness that assures him, no matter what happens, that "God's in his Heaven; all's right with the world."

If you keep this one thing in mind, that we are always creating, always manifesting in our lives the conditions we hold in our consciousness, you will not make the mistake millions are making today, manifesting the things they don't want instead of the things they want.

When we realize that our enjoyment, our happiness, our satisfaction, our achievement, our power, our personality, all depend on the nature of our consciousness, the aim and direction in which it is unfolding, we will not deliberately build up a consciousness of the very opposite of all that we are struggling to attain.