How To Bring Out The Man You Can Be

Said the great psychologist, William James, "The average individual develops less than ten percent of his brain cells and less than thirty percent of his possible physical efficiency. We all live below our maximum of accomplishment."

Suppose a human being, because of lack of proper nourishment, or of some accident in childhood, should attain only ten percent of his possible physical height and only thirty percent of his normal weight, what a pitiable object he would present! What a wretched apology for the well-proportioned, perfectly developed being the Creator had planned the unfortunate dwarf would be! 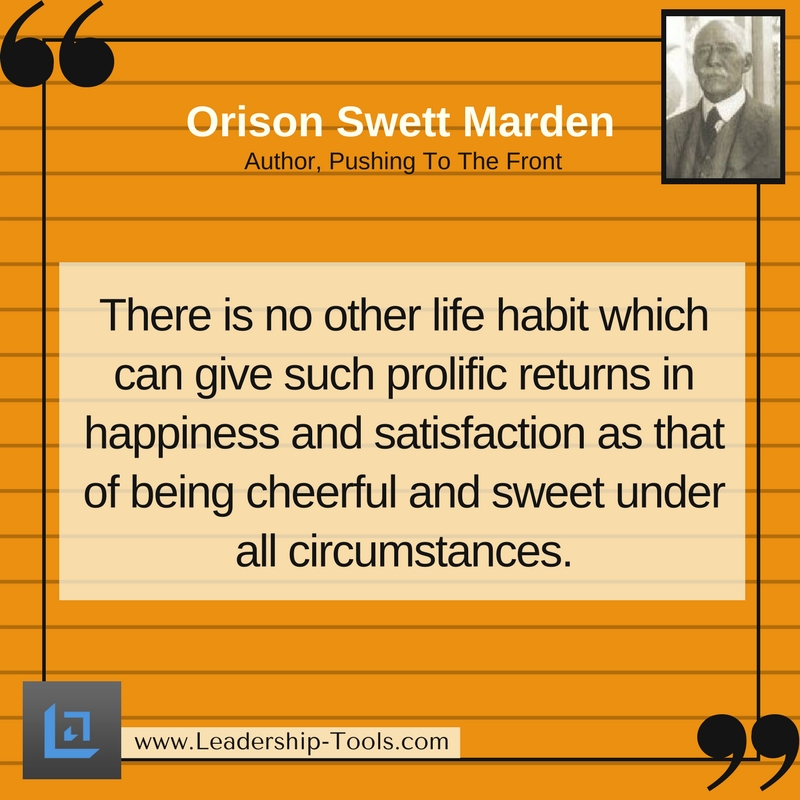 Yet, so far as the man of the God-plan is concerned, most of us are self-made dwarfs, falling short not ten, twenty, or thirty, but a hundred percent of our possible development. Even those who climbed to the mountain peaks of human achievement, — the Michael Angelos, the Beethovens, the Shakespeares, the Miltons, the Dantes, the great men and women in every field of creative work, — never reached the maximum of their possible accomplishment.

During a visit to California, I one day stood in awe before a giant tree, in the hollow of which General John C. Fremont, "Pathfinder of the Rockies," with his staff, lived for months when on a government survey expedition. More than a hundred soldiers had been in the trunk of this tree at one time. Near by was another, over three hundred feet in height, estimated to contain about two hundred thousand feet of lumber, — enough to build all the houses of a small village.

As my eye wandered over their huge trunks and limbs, the thought came, that had the same seeds which produced these giants of the forest been planted in a cold northern country, in soil which contained but little nourishment, then, even with the greatest care, they would have been dwarfs instead of giants.

Instead of being capable of housing a detachment of soldiers, or of producing enough timber to make houses for a whole village, they would have been mere scrubs of trees, pigmies instead of the giants they might have been under the right conditions for development.

In other words, every acorn, if conditions are just right, may become a grand oak, but every human acorn, in spite of conditions, no matter how bad they may be, can become, if he will, a grand man.

Man's development depends on his ideal of himself, the mental picture of his appearance and environment which he constantly visualizes. So long as we think that we are merely human, sons of Adam, inheriting only his weaknesses, his limitations; so long as we are convinced that we are helpless victims of heredity, of circumstances and environment, we can never express, anything but mediocrity, weakness, inferiority.

A great artist who put his whole soul in his work would never look at inferior pictures, because he said, if he did, he would become familiar with false artistic ideals, and his own pencil would soon catch the taint of inferiority.

"Persistently hold the thought that you are eternally progressing towards something higher in every atom of your being. This will make you grow, will enrich your life."

It is familiarity with a weak, inferior ideal of ourselves that dwarf s and stunts our development. As long as we think we are poor ineffectual nobodies no power in the world can make us anything else. Our mental attitude fixes the limit of our development. Nothing can save us from our own conviction of inferiority, and inability to rise above the things that hold us down.

"We actually have powers of many kinds which we habitually fail to use," says Dr. James J. Walsh. "We have acquired the habit of not being equal to ourselves." This habit of not being equal to ourselves is what causes a great majority of human beings to underestimate what they are capable of doing. They measure their capacity by what they have done in the past or by what others think they can do, and so they plod along in a narrow groove of inferiority, in which their real power is never exercised. Unless some fortunate accident intervenes, the larger man remains undiscovered, and they go to their graves without ever having gone below the surface of their almost limitless hidden powers.

I recently met a man who had plodded along in a very ordinary way through what is commonly regarded as the most productive years of life without showing any special ability. In fact he failed in several things he had attempted. But, although he was not strong on self-confidence, he kept hammering away and happened to make a business hit.

His success aroused a new man in him, gave him a new sense of power. He was never quite the same afterwards. He carried himself more confidently, with more assurance. The vision of new power he had glimpsed in the great within of himself opened his eyes to his possibilities, and he rapidly developed a marvelous business capacity which he never before realized he possessed.

"That vision which grips your heart, that longing of your soul to do something significant, that dream of high achievement which haunts your imagination, is not a mere fantasy, a whimsical unreality, it is a prophecy of the big things you will do if you get your higher self to work for you."

His whole outlook and his entire methods of business changed. Timidity, hesitation, diffidence, a wobbly uncertain policy of life gave place to boldness, self-confidence, quickness and firmness of decision, and he went up by leaps and bounds until he became a great financial power, and a leader in his community. He had found the hidden spring which opened up the gate of his life and gave him a glimpse of his divine resources. 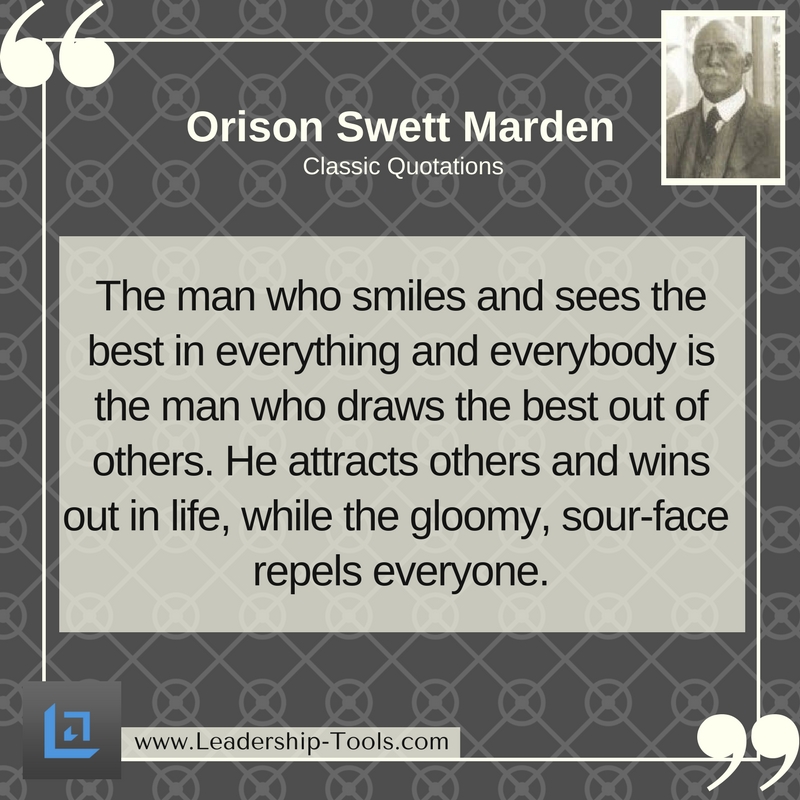 It doesn't matter so much what others think of you; what they believe is possible to you; it is what you think of yourself; what you believe you have the ability to do that counts. This is of immense importance to you, because you will not begin to touch your possibilities until you make the acquaintance of your real self, the bigger possible "me" in you.

After his seventy-five years of marvelous individual accomplishment, Thomas A. Edison says that man is yet in the chimpanzee stage of development, and that he has gained but a mere glimpse of his environment.

The unfolding of man's hidden powers has progressed more rapidly during the past twenty-five years than in any other fifty years of the world's history. But the advance in individual progress is nothing compared with the developments this century will witness.

There is no name so secure in the Hall of Fame, there is no leader in any line of endeavor today, who is not likely to be superseded by someone who is yet entirely unknown to fame. There may be at this moment, on this continent, some youth who will break all previous records in music, in art or literature. There may be working for some American merchant today a clerk who will eclipse the records of the greatest merchant princes of the world. A greater than Shakespeare may now be in swaddling clothes.

When every human being awakens his sleeping genius, brings out the giant in the great within of him, we will have a world of supermen, a race of gods.

"Don't be afraid to think too highly of yourself. If the Creator made you and is not ashamed of the job, certainly you should not be. He pronounced His work good, and you should respect it."

John Drinkwater, author of the great play, "Abraham Lincoln," says: "He who most completely realizes himself is he who most fitly assumes leadership of men, not only in the days of his life on earth, but in the story that he becomes thereafter. And for nearly two thousand years there has been no man of whom we have record who has so supremely realized himself to the very recesses of his being as this American, Lincoln."

There is no man, however humble his birth or environment, who brings out the best that is in him, realizes himself "to the very recesses of his being," who will not be a great man. But it is only at long intervals that anyone does this; that a man arises whose full power has been given anything like complete expression as in a Lincoln.

Many of the richest mines in the world were abandoned time and again before their hidden wealth was discovered by the more gritty and persevering prospectors. These men were not satisfied with superficial digging, but went down into the very bowels of the earth until they found the treasure they were after. They became fabulously rich, while the fellows who quit, or wandered from claim to claim, never giving time or energy enough to one; never having enough faith in its possibilities to dig deeper, died in poverty.

In one instance I know of a man who mortgaged everything he had in the world, borrowed all he could, and even sold his clothing, to raise enough money to enable him to sink a shaft below the point at which a former prospector had quit, and, going only a few yards deeper, he struck one of the richest silver mines on this continent.

The men who never amount to much, the failures and ne'er-do-wells, are like the prospectors who dug only a little way down into their claims and then quit, dying in poverty and wretchedness when they might have been rich beyond their wildest dreams. There are thousands of down-and-outs in the great failure army today who had possibilities that would have made them captains in the ranks of industry, leaders in different vocations; there are multitudes of employees, much abler men and women than their employers, plodding hopelessly in inferior positions, who have enough undiscovered ability hidden away in them to make them supreme in their line, but they have never had the grit, the courage and the perseverance to dig down to the treasure-house of their hidden wealth. They prospected a little along the surface of their being and then quit.

There is just as much success material; there are just as many success potencies in many of those who fail as there are in those who succeed. The trouble with most of the failures is that they never dig deep enough into themselves to bring out the bigger man that is hidden in them.

"The constant struggle to measure up to a high ideal is the only force in heaven or on earth that can make a life great."

Multitudes of men and women never discover their real selves, because their investigations are so superficial. They don't think deeply or work in the right way; they don't focus their efforts with sufficient intensity to open the door to their locked-up possibilities.

Are you willing to go through life as a pigmy when there is something in you which even now is telling you that you can be a giant? Are you going to put forth a giant's efforts to bring out the biggest thing in you, or are you going to sit around waiting for luck or something outside of yourself to come to your assistance, — for outside capital, for somebody to give you a lift?

You will never unfold the bigger man God has wrapped up in you in this way, my friend.

The only power that will develop the giant in you is right inside of you.

God himself can't develop the human acorn that chooses to remain a dwarf, a scrub oak instead of the grand human oak of the Creator's plan.