The Life of Orison Swett Marden Chapter I

A Son of the Granite Hills

The Life Story of Orison Swett Marden Chapter I:

Before an individual can think or act independently the influence of heredity and environment are at work, making their impression upon his entire being. As surely as they determine the trend of his mind do they perform their part in molding his body.

Stephen Allen, in remembrance of Daniel Webster, said: "I could not help thinking, as I stood with some of his neighbors and family upon the spot where he first saw the light of day, that those wild, bleak hills amongst which he was cradled, and those rough pastures in which he grew, had left their impression upon his soul." 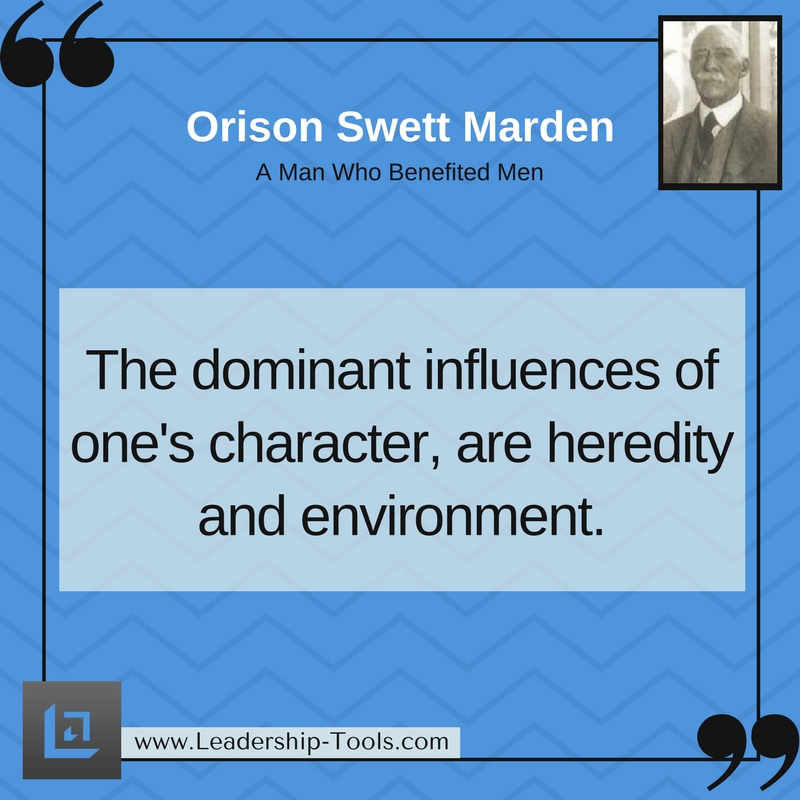 No less applicable are such thoughts in relation to another son of New Hampshire, Orison Swett Marden. Less favored by circumstances than Webster, the sternness of his environment had even more profoundly affected his character. His earliest ideals were unforgettably linked with that famous wonder of New England, the "Old Man of the Mountain."

Every tourist visiting the White Mountains is thrilled at his first glimpse of that massive stone face. Fashioned from the granite front of Profile Mountain, as if by the cunning hand of a giant sculptor, the stern face, like the guardian spirit of Puritan New England, looks out through the ages over the rugged hills and grassy valleys of New Hampshire. Its compelling features, stamped upon the subconscious mind of the little boy named Orison, remained with him throughout his life, exerting a powerful influence upon his entire career, a career that defined American success.

It is said that one summer, in the performance of his tasks, his steps home one evening led him past the "Old Man of the Mountain." Coming toward it as the sun, dropping behind the mountain peaks, encircled the head with a flaming appearance, it fascinated and, at times, terrified, the sensitive, lonely child.

"Success is not measured by what you accomplish, but by the opposition you have encountered, and the courage with which you have maintained the struggle against overwhelming odds."

In after years he recalled how, as the shadows passed over the face, and the darkness gathered, it loomed in his imagination as a stern judge, — one who would be merciless toward any deviation from honor and justice. "It had a mysterious influence over me," he said. "I felt, in a vague, undefined way, that it required of everyone who looked upon it, a high ideal of life, and that I must live up to what it has demanded of me."

There is a strange coincidence between the origin of the New Hampshire boy's early ideal and that of so many heroes and legends, this according to Rev. J. H. Hoffman, in his admirable lecture on Doctor Marden's life and work. 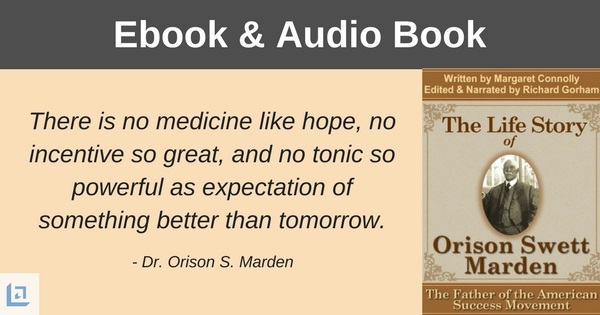 Pietro Casola, a young Italian, so goes the story, wished to paint an immortal canvas.

"Mother," asked he, "what picture shall I paint? How can I benefit men?"

"Why not paint the Christ coming to judge the world?" she suggested.

In preparation for his task the boy was sent to the best schools and studied art under the great masters of Europe. Its technique learned, he next sought for a model. He visited the famous galleries of the Old World, but found no approach to his idea of the coming Christ. Then it was decided that he must come to the New World.

He came and explored along our shores and up and down our great rivers. He wandered far West, saw our inland lakes, and again turned his face to the East. While ascending the Kennebec River he was shown the outlines of some "White Foreheads." The Indian guide informed him that each of the "Foreheads" was the house of a Great Spirit. 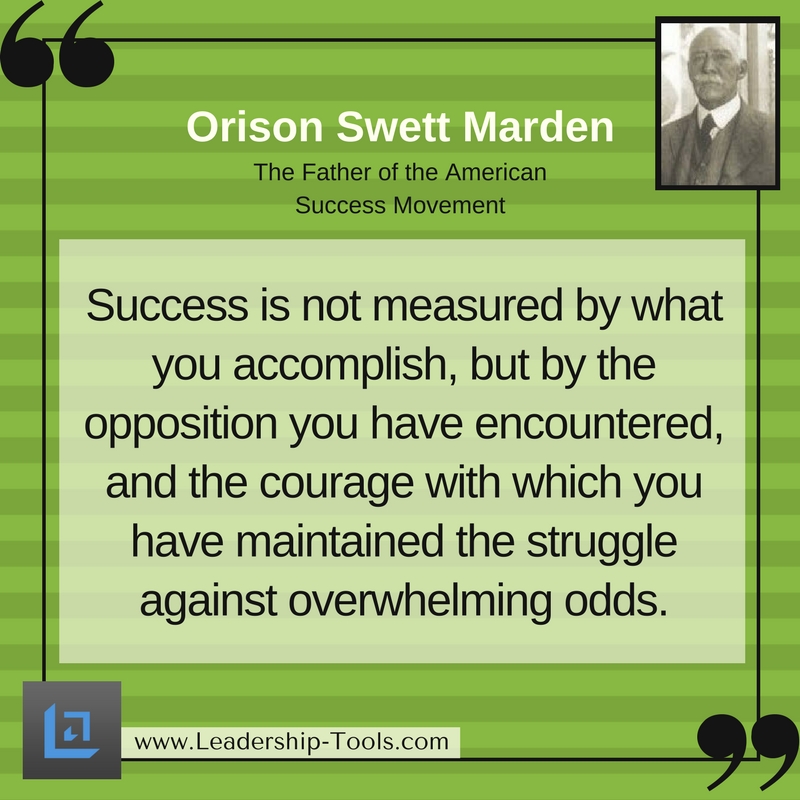 Suddenly the guide beckoned to Pietro to look up. He looked, and saw a great Stone Face, calm, stern, majestic — a portrait of the Divine Judge. Pietro had found his model. He would paint that face — to benefit men.

Like the Old World painter of the legend, Orison Swett Marden, of the New World, spent his youth in pursuit of his ideal and in preparation for his life work. That work, like Pietro Casola's, was to benefit men. But there the resemblance between the hero of legend and the now famous writer, ends.

The boy, Marden, born in the New World, in 1850, under the very shadow of the White Mountains, where it falls across a New Hampshire hamlet, just across the valley from the great white Stone Faced legend, — was not born with a silver spoon in his mouth.

No mother yearned over him in childhood, sympathized with him in his hopes and dreams, planned and discussed his future with him. No balmy climate, no smiling Italian landscape, warmed and brightened his young life.

Yet, out of the very hardness of his environment, the rigorous hills, the harsh New England climate, the stony soil — an environment which harmonized with the harsh conditions of his life — he drew that indomitable strength of character that made him a leader, an inspirer of men.

"Modern times have not produced a more remarkable character than Orison Swett Marden," says the historian, Doctor Francis T. Miller. "He was the twentieth century materialization of Aristotle and Plato — he put their philosophies of life in the abstract into a practical science of living.

"What he did for the world cannot yet be fully estimated. But we do know that millions of men and women, regardless of race, creed or political conditions, are applying his practical philosophy in their everyday lives."

"Having risen to a definite position among the philosophers of the ages, Doctor Marden might have founded a new school of science, or a new religion, but he found that, in his day, what the world needed most was not more conflicting creeds, but a welding of all creeds into a law of daily action — a rule of conduct — a definite schedule of living that could be as accurately applied to everyday problems as the law of mathematics itself.

"So, he took philosophy, science, religion, psychology, physics, metaphysics, psychiatrics, and all the 'isms' of the ages, and worked out for the human race a practicable, verifiable, positive law of living that when correctly used, could not fail. This he gave to the world, free and untransformed, uncontrolled by theological doctrines or church organization, unallied with any school of science."

When you purchase The Life Story of Orison Swett Marden audiobook, you also receive a free ebook version of this inspiring classic.

Listening to audio books are the perfect solution for the busy leader. It's easy to learn and grow by listening to inspiring audio books during your morning and afternoon commute; when working out at the gym or hiking outdoors.

Incorporate leadership audio books into your normal routine and make the most of each and every day.